Whether you are ventilating a grow tent or your whole house, ducting is a vital piece of your ventilation system that directs airflow to where it needs to go. Without ducting, your fan is essentially wasting energy, since the output would return to the space you’re ventilating. Ducting, while necessary, decreases your fan’s efficiency which makes it work harder to move stale air. Each fitting also decreases your fan’s efficiency. Two factors are behind this dropped efficiency as a result of using duct tubes and once you know what’s behind it, you can take steps to mitigate the effect.

Turbulence is a kind of friction where the air is rubbing up against itself as it turns. When an inline fan is free to blow uninhibited, it achieves maximum airflow. However, once it blows through tubing the fan must work against the pressure built up in the limited space. In ventilation systems, there is no way around this short of directly fitting your inline duct fan to the outside.

Space limitations may require you to bend your ducting 90° to best route the airflow to where you need it to go. But as you can see in the image below, the type of ductwork fitting you use can make a big difference. The sharper the bend, the more turbulence there is in that area, the more resistance the airflow goes up against. Whether you use rigid steel or flexible ducting, making sure the elbow is as obtuse as possible will reduce the wind resistance. 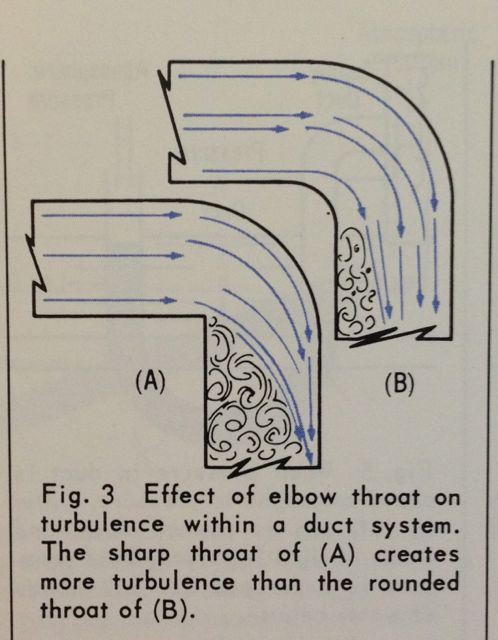 Another way to improve airflow is to taper off the friction inside. As air is exhausted by your inline duct fan, it rubs against the ducting’s inner surface, losing energy and slowing down. The degree of airflow reduction depends on the smoothness of the inner surface. The smoother the inner surface, the better the airflow and the rougher it is, the more resistance the airflow is up against. Friction can be easily mitigated by pulling the ducting all the way out so that it’s smoother than one that’s flexed. Rigid metal ducting has an even smoother inner surface that has less friction for passing air.